The elite club where the crash and burn is just as swift and harsh, but even more vivid and public: the Harvey Weinstein club.

Every few years, Harvey picks a new girl as his pet. He puts her in a picture or two, takes her to an event, makes her a project, an attempted creation.

The Harvey Girls are easily spotted. They are all very pretty, often in a rather generic sense. Their instant fame and the push behind them comes seemingly out of nowhere and without any justification in terms of resume or skill set.


But the most telling sign, if you're looking, is the Want. These girls, each of them, has the look of desperation, of need. They WILL be famous. They WILL be stars. 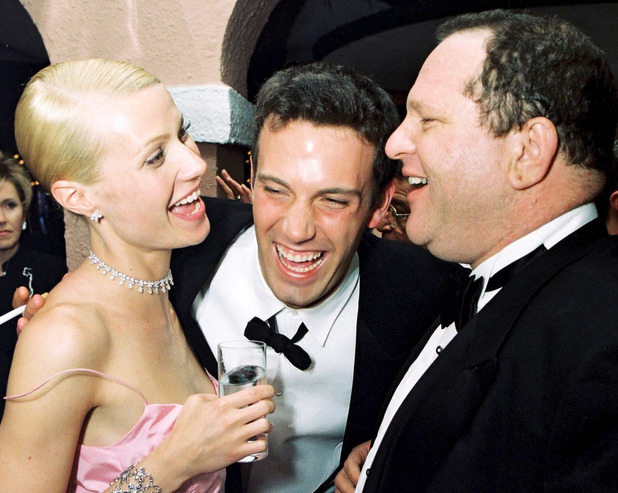 Gwyneth won her Oscar for 'Shakespare in Love' in 1998, produced by Harvey Weinstein. the rumors of Gwyneth and Harvey's escapades were so wild, going as far as her then boyfriend, Brad Pitt allegedly breaking up with her because he caught her on her knees in front of Weinstein.

Despite getting an Oscar for 'Mighty Aphrodite', Mira Sorvino failed to be as successful as Gwyneth, practically being in nothing of note since. Alba had been around for a while prior to 2005's Sin City, but apparently Harvey fell in love at first seductive bull ride, trusting her with Awake.
when 'Awake' failed he given up on her. the one thing Harvey wants the most are Oscars and Alba did not have a shot at being taken seriously as an actress. It's easy to forget just how hard the push was on Sienna Miller. She was huge. She was painted as this immense fashion icon who would be an unstoppable celebrity force as soon as Factory Girl was released. Harvey wanted to pull a Gwyneth and get her an Oscar.

Needless to say, that didn't happen. Despite only being in a CW show, Lively was all of the sudden touted a fashion icon, like Miller and became a somewhat of an it girl in the press with her fashion choices and her highly publicized relationship with Leonardo Dicaprio. Sadly, that did not translate into film succes.

Harvey's biggest success since Gwyneth, he had managed to get her an Oscar at 22 and make her an it girl. more then rumors about Lawrence sleeping with Weinstein for that success, she was even accused of it by Lindsay Lohan.
T

And the current ones wear his wife's designs on the red carpet...

I though Gwynny has connections to Hollywood through her parents.

He is so disgusting, i could never... eeeeeeewwwwwww

I've mentioned on here that I'm trying to break into screenwriting/acting...

well, the other night, I had a dream that I met Harvey and we exchanged info because he was interested in my script. This fool texted me asking for nudes. I woke up like, "Whaaaa...?"


Mira Sorvino. Paul (Big Paulie in Goodfellas) Sorvino's daughter. She won an oscar for Mighty Aprodite and did a few other films before fading away.

lakeluna said:
I've mentioned on here that I'm trying to break into screenwriting/acting...

well, the other night, I had a dream that I met Harvey and we exchanged info because he was interested in my script. This fool texted me asking for nudes. I woke up like, "Whaaaa...?"
Click to expand...

Are you a blonde?

They missed out Gretchen Moll.
F

Uffie said:
They missed out Gretchen Moll.
Click to expand...


That's just how unsuccessful her celebrity campaign was.

MargoChanning said:
Are you a blonde?
Click to expand...

Well, blacks can be blonde but you know what I mean!

BohemianFairy said:
And the current ones wear his wife's designs on the red carpet...
Click to expand...


Is this the same woman who has/had Ms Washington wearing her designs? Chile.....

But Jennifer slept with more than him though. Add Kerry to the list too.

Is he the most powerful in Hollyweird?
J

I liked Mira in Romy and Michelle. Gwyneth already was connected to Hollywood through her parents. Also people think that Harvey made Jennifer Lawrence who she is. The girl received an Oscar nomination for Winter's Bones, which was her breakthrough role because that got her casted in Hunger Games, which got her casted in Silver Linings Playbook.
T

Due to an eye injury as a kid and a librarian who mentored him.

He fell into a love affair with books.

This apparently has been the reason behind his brilliant selection of scripts.

He doesn't rely upon readers but his own gut instinct.

But I don't know how those broads sleep with him.

He is so fucking fat and ugly.

I say that having a really high constitution for ugly dudes.

I fucked some real pigs back in the day.

But nothing so vulgar and grotesque as him.

So more power to these broads.

But I'm not sure an Oscar is fair trade for what that's got to be like.

Where the money resides

BohemianFairy said:
And the current ones wear his wife's designs on the red carpet...
Click to expand...


I was just about to type this same thing.

For some reason, I don't think Gwen had to sleep with her. I think that was just all Harvey's ego of being a Hollywood king/queen maker.

And I thought the tea was that Harvey TRIED with Blake, but because Blake wasn't having it, he never tried to make her happen (which was a mistake on her part because sleeping with Ben and Leo wasn't enough like she prob thought). Maybe thats why she stopped trying to build her career from the huge momentum she had.

And how ya'll gon forget about Grethen Mol and that blind about her and Harvey? Cuz chiiiiile... :no:

That blonde woman on the far left of the pic seems to look lowkey disgusted at Harvey W.

ETA: I was watching Monk the other day and spotted Jennifer Lawrence in a very small role where she appeared in one scene and spoke one line. This was in 2006 and her big break didn't come till 2012 in Hunger Games so I imagine she must've been desperate when she had her chance with Harvey Weinstein.

The original Claire from My Wife & Kids was in that episode too.

I doubt 1 & 2 because their parents are famous actors and they don't need to sleep with anyone to get a gig. However, the possibility exists for the others.

Escaping rough side of the mountain...

semicharmed said:
I though Gwynny has connections to Hollywood through her parents.
Click to expand...


Yeah, Blythe Danner, her mother, is/was an actress. Also, they come from a rich family, IIRC.

I mean she's nowhere near the top, but what about Michelle Williams?

out of the black

Regal Mess said:
But Jennifer slept with more than him though. Add Kerry to the list too.

Is he the most powerful in Hollyweird?
Click to expand...


I wouldn't say he's the most powerful, but he's up there. He has clout for sure - usually because he's so damn aggressive and shameless with his "business" (which he's been openly criticized for). He's a bully and he usually gets what he wants. To be honest, he's probably doing some sketchy shit for people higher on the totem pole because he's hardly the richest or the most powerful person in Hollywood. I mean, if someone like Steven Spielberg or even Martin Scorsese wanted to crush Harvey...they easily could. But the man is good for business, y'know? He'll bully and schmooze his way through awards season and get your film all of the awards if he has to. I guess that's why people are willing to eat his ass for film roles, lmfao.

Escaping rough side of the mountain...

Date Night: Jordyn Woods and Karl Anthony Towns Enjoying the Evening
Why are clothes so thin now?
A moment ago
SouthernNotCountry

What's her zodiac sign?
Struck a nerve?
A moment ago
VeeAP

Was My Professor Being Racist?
I told her I didn't answer one question that was worth 15 points because I did not understand it, I should've gotten an 85, or an 80 at least...
A moment ago
Loeny

Another massive brawl breaks out at Miami Airport 'over masks'
I'm confused as to why in all these videos popping up women and men in our community fight as equals? It pisses me off how women put themselves in...
A moment ago
CookieButter
D
NSYNC General Discussion- Part 5
Yikes. So that is 3 out of 5 people in the group who have been associated with predators? .
A moment ago
Onyxrose81

StyleBy Casanova Discussion Thread
She doesn't want clients.. hell, she cant GET clients ..and she sure as hell dont need 'clients'. She only made her pages to get free stuff from...
A moment ago
mochaice

Chris Cornell Blind Item - Might Explain His Death XII
back on the benzo train I see. REALLY BITCH REALLY??? NOBODY believes the shit you spew. Gonna start another phony foundation? How bout requiring...
A moment ago
prorenada

Woman kills and dismembers roomate after she denied her sex
The police cam of her arrest was chilling, she really thought she could stop multiple cops from opening the suitcase. The victim had a...
A moment ago
Ambi D

Brownies In The City Podcast (Jessie Woo, Diamond D, Brianna Amor)
Anyone know what lead to this? I know Jessie went live but idk what she said I want to know what really happened
A moment ago
Ikealv4
Top Bottom