Anthony Joshua: Wilder Admitted It, We Made Him a Lucrative Offer

Joshua: Wilder Admitted It, We Made Him a Lucrative Offer

Wilder, after months of silence, generated a mountain of headlines when he took to social media on Saturday night.

In a series of social media messages directed to WBC heavyweight champion Tyson Fury, it was revealed by Wilder that he was offered more money to face Joshua but lived up to a promise to fight Fury in a rematch - after they had fought to a controversial twelve round split draw in December 2018.

"You know I was offered more money to fight Joshua than I was getting to fight you. Again being a man of my word, I fought you," Wilder stated on social media. 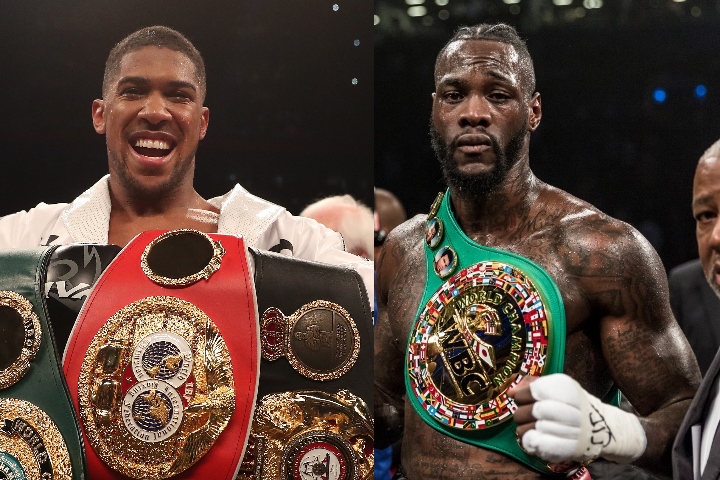 Wilder has been out of the ring since February, when he was stopped in the seventh round of his rematch with Fury. The two sides are now in a legal dispute over whether or not Wilder's rematch clause is still valid.

According to Joshua, his division rival finally revealed the truth about their financial discussions.

"It makes the ultimate sense. It's hard because at the time when people are talking and you see lots of media stuff, you start to believe what that person is saying," Joshua told Sky Sports.

"When time goes by, naturally the truth will always reveal itself. I get a lot of stick but I take it with a pinch of salt. He admitted it. We made him a lucrative offer but he wanted to face Fury. So be it. If that's what he wanted to do, fine. But he dragged my name through the mud.

"While Wilder was trying to make me look like a bad person, that I didn't want to enhance the sport, or fight certain fighters, I just had to roll with the punches. He has come out and said it himself. We offered him a really good deal but he wanted to fight Fury. People can take it how they want, and see what the truth is now."
You must log in or register to reply here.
Share:
Facebook Twitter Reddit Pinterest Tumblr WhatsApp Email Share Link

H
How come people with unibrows just don't shave the hair in the middle?
Wow Good on her for embracing that shit but That’s…wow Found her
A moment ago
jackieup

Carmen Caboom
Until I can see it, I'm not believing it even happened. Probably Carmen saying that herself because she know we want to see her get her ass beat...
A moment ago
WhoDhoo

An australian journalist's video on trans cheat laurel hubbard reaches more than a million views
I feel so bad for female athletes... This man walks in and just dominates the competition and you're there having trained so hard all your life. I...
A moment ago
Caligullfree

The Henry Cavill Appreciation & (Former) Harem Meet-up Thread (Part 6)
I need to go check out DM. I read somewhere the LSA posts from Dallas are gone now. That may be interesting if those are the only 3 that were...
A moment ago
txmarine

He wants a “relationship trial run”
Relation trial run? Lord. Im getting old. Isnt that what we use to call dating? I wouldnt do it, it’s already starting difficult
A moment ago
invinciblenay

Girl took back all her money from her brother's college fund after she discovered that he was...
Good! Let the light brights pay his tuition.
A moment ago
Currv

See The Thing Is... podcast
Watching the latest episode with the Nigerian guest...Kaz? Dare I say that Mandi looked nice this week!? Still listening...
A moment ago
Saucy

I have to move back into my parents house but I'll be forced to follow all their religious...
Be Muslim until you can afford to be otherwise. Sorry op
A moment ago
PhD4me

Ready To Love Season 4-Houston(again)
Damn my last post was long. Two more things. -Detrick (however we spell his name) was so boring. It’s proof that personality takes you far, he did...
A moment ago
Coco K. Flo

RHOP Looks like Season 6 will be a rough one for Karen
Oh, you’re definitely talking about yourself there. Your inability to comprehend rears its ugly head any time anyone says something about your...
A moment ago
Mirabilia
Top Bottom