LSA Is Not Your Therapist CHICAGO (CBS) — A married couple with a long history of service to their South Side community were the victims of a horrific attack over the weekend. Now friends are rallying to support the couple many say would “give you the shirts off their backs.”

Even in this violent city, what happened to Timothy and Renee Johnson is inconceivable.

“It’s like a page out of a horror movie,” said their daughter, Destinee Johnson.

Their three adult children, who live in different parts of the country, rushed to their sides.

“No one wants this happen to any person at all, let alone your own parents,” said their son Joshua Johnson.

On Saturday Timothy and Renee were on Emerald near 105th doing chores for Renee’s 95-year-old mother.

“It was nice outside, so you go out and clean up around the house,” said Timothy’s sister Rhonda Hutcherson. “And he was in the alley, cleaning up behind there.”

A man approached Timothy, asking if he wanted to buy something.

“My brother just told him, ‘No, I’m ok. No thank you. I’m not interested.’ And he just attacked him,” Renee said.

Timothy was beaten with the shovel he was carrying to do yard work. When Renee ran to her husband, she too was attacked.

“He brutally attacked them,” Renee said.

She said it’s hard to describe.

Their eyes were gouged, parts of their ears bitten off. Prosecutors say when the 28-year-old man was arrested, he was covered in blood.

“Nobody could have imagined we would wake up on a Saturday and this was going to happen,” Destinee said.

It happened to Timothy, a minister at Salem Baptist Church who who pastors on streets and parks, even as he recovers from cancer.

“I really want you to understand, and I want the people to understand, how much of a giving person he is,” said Renee. “He will give you the shirt off his back.”

It happened to Renee, a special education teacher.

“They’ve done so much for the students and people in this city, and so this to happen to them is just unfortunate,” said their son Antonio.

They are two pillars of the community now facing a long, difficult recovery.

“My parents’ hearts are so big. My parents’ love is overflowing,” said Destinee. “We don’t know why this happened, right. But it’s a nightmare, but blessings in it as well.”

It’s a blessing, they say, that there has been such an outpouring of love for the couple. They will not be able to work anytime soon, and they have a GoFundMe page.

The 28-year-old alleged attacker is held on a $5 million bond.

EDITED TO ADD GOFUND ME BELOW

That guy reminds me of that bath salt cannibal. Drugs, mental illness or just plain old psychopathy, he needs to be locked up for life be it in a prison or mental health hospital.
T

Damn! This is a real life horror movie.

Chicago is hell on Earth. I pray for a speedy recovery.

Horrific. I wish them a speedy recovery.
A

I was wondering if they were going to let this out, the offender was so damn crazed, the hospital wanted nothing to do w/him. He was supposed to get checked out but no one could handle him, it took 2 days to get him checked and released so they could cart his ass off to jail.

AllLashes said:
I was wondering if they were going to let this out, the offender was so damn crazed, the hospital wanted nothing to do w/him. He was supposed to get checked out but no one could handle him, it took 2 days to get him checked and released so they could cart his ass off to jail.
Click to expand...

wow. what the fck. i wish them a speedy recovery. just fucking awful

I Don't Know Them

This broke my heart. I pray that the Lord protects their family and continues to pour love, finances, and strength into their lives.

But why? All because he said he didn’t want to buy what he was selling? It sounds like he was probably planning to rob him and just took the opportunity because he was the only one outside at the time.

Dear God, how horrible. I pray they will be able to be fully healed. I really hate people.

I pray they make a full recovery and the attacker never sees another day of freedom.

This sounds like someone with severe mental illness and he must be put down.

This story is sad as hell. This monster sounds as if he's mentally ill, and took some "bad" drugs. But he needs to go to prison, and he needs to rot there. Peace and blessings to the victims and the family. I can only imagine what the parents are going through.

It always seems as horrific things happen to such good people. Yet assholes get to roam free, living their best lives.

⚜️ Made in New Orleans ⚜️

Pure evil. Pure demonic evil. I hope he never is able to walk the streets again and I pray this couple makes a complete recovery. SMH

Top notch hoes get the most, not the lesser

Wow. I hope they recover fully.

AllLashes said:
I was wondering if they were going to let this out, the offender was so damn crazed, the hospital wanted nothing to do w/him. He was supposed to get checked out but no one could handle him, it took 2 days to get him checked and released so they could cart his ass off to jail.
Click to expand...

That’s strange. Isn’t it the hospital where he belongs and not jail?

demons. When you do drugs, you then come out of your vessel and invite demons in to take over.

this is definitely the case.

Do they have a go fund me?

I am very devastated by this news.
S

When you start attacking people by biting and gouging their eyes straight to jail were you can be secured and receive mental health resources in there.

All right that's enough internet. Going to donate and call it a night. My God

Oh my goodness. This story is horrific. I hope they make a speedy recovery and won't suffer any PTSD.

I hope the goons inside of the jail rip that fool apart. They always want to ride on the wrong person. But here is someone as the perfect candidate. They need to be marching, shooting for pastor and his wife!

Miss NiceNastay said:
Do they have a go fund me?

I am very devastated by this news.
Click to expand... 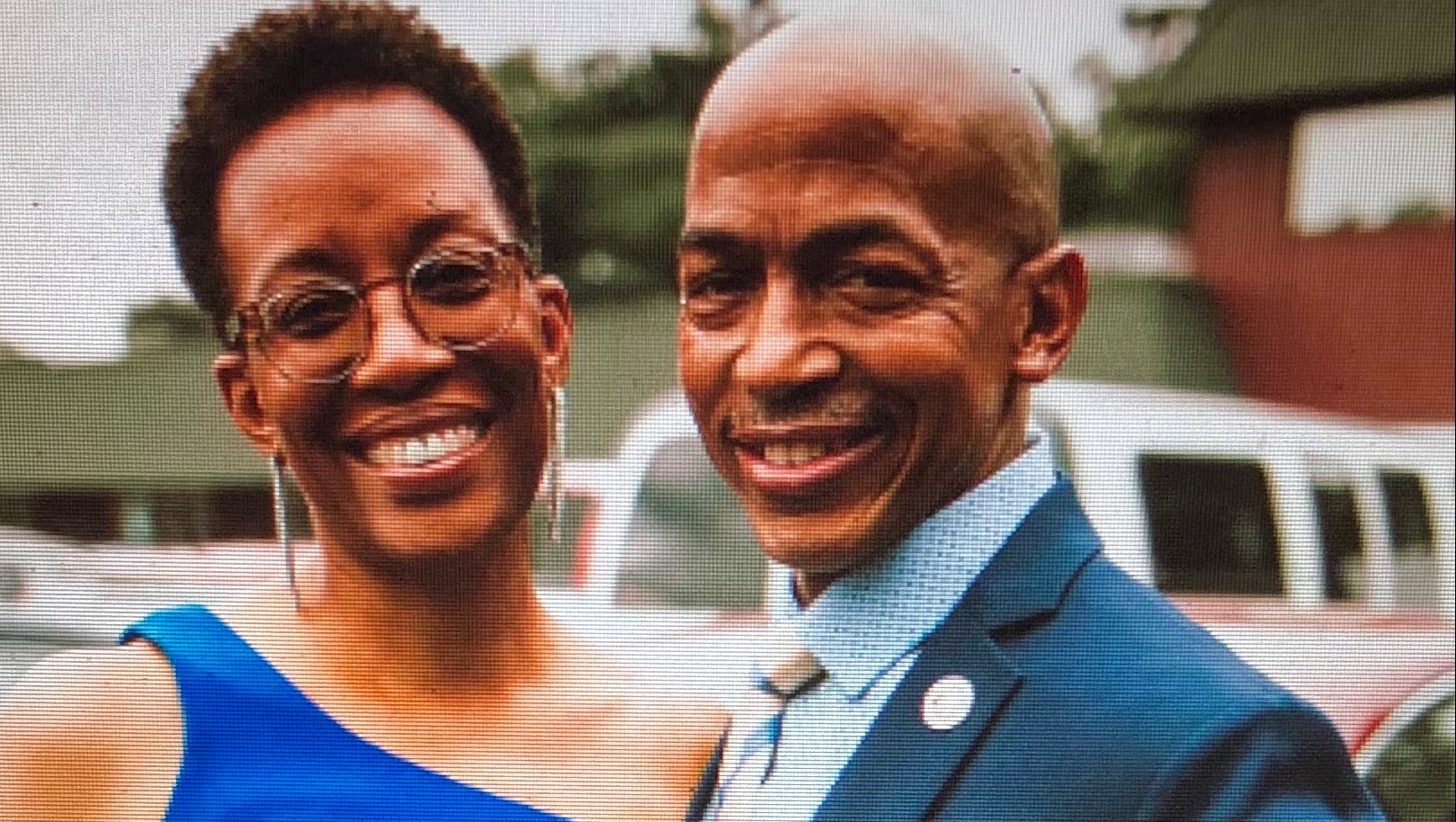 On Saturday, May 1, 2021 our parents were brutally attacked in Chicago while … Destinee Johnson needs your support for Timothy and Renee Johnson Recovery Fund

Analogue gurl in a digital world

Dear lord, how horrific! This world is a cesspool and the lunatics are about to take over the asylum. Im really thinking of buying a taser. Seems like nowhere is safe anymore, not even your own backyard.

Hopefully this madman didnt do too much permanent damage. Im praying for their healing, both mental and physical.
L

I really don't know what to say I wish them a full recovery both physically and emotionally.

The way i cringed with the gouging eyes out bit. Praying for healing for these two, seemed like very nice people a damn shame.

LSA Is Not Your Therapist

On Saturday, May 1, 2021 our parents were brutally attacked in Chicago while … Destinee Johnson needs your support for Timothy and Renee Johnson Recovery Fund

Thanks. I added the GoFund Me link at the bottom of my page. This is so sad. I hope that they have a full recovery.
M Synthetic pot is causing people to bleed from their eyes, ears
2
Apr 2, 2018
parkerboy

Man in ICU after eyes gouged out with spoon
Apr 21, 2011
enchanted
E

E
Mother blinded by boyfriend who GOUGED both of her eyes out
2
Apr 16, 2012
bohochic

J
Kamala couldn't wait to get out of Central America and back to her top priority
Is the gay community what, 3% of the population if that. How did they become so darn powerful? They've BEEN in power, they were just in the...
A moment ago
talking2much

Old BGC tea: Rima vomit & shit everywhere, Falen on drugs, real reason Erika sent home.
Exactly. Julie was so obviously a weak ass bitch. I believe SHE was getting preferential treatment from the producers. I’m glad she got popped at...
A moment ago
ManolosAndManicures

life of the cassells -vloggers
Tell me y’all don’t see it! He kneecap look like turtle lol No you didn't! :LOL: :LOL: Give me your phone.
A moment ago
Calichic2

A blessed & grateful She By Sheree Whitfield celebrates finally becoming a millionaire!!
It’s always weird/cringe when these public figures celebrate reaching a certain amount of followers. Like…. okaayyy? And most of them don’t even...
A moment ago
CarmenJonesGal

I know that's right! Saweetie popped out looking bomb with these blonde tresses and this...
Cute but the accessories throw off the look.
A moment ago
lovethriller
Q
How can you cope w the fact that you are nearing adulthood?
Sweetie this is not the place
A moment ago
Hot fries

In which ways do BM supposedly "compete" with BW instead of others?
This is the hierarchy in the United Racists of AmeriKKKa White men White women Asian women Asian men Latina women AA women Latino men Indigenous...
A moment ago
SeventeenDayze

Naked Brooklyn mom tosses newborn, 2-year-old out window before jumping herself
I have no empathetic words for a woman, black or white, who slams her 4 month old's head on the ground. Absolutely not. Me neither. This is why...
A moment ago
miss chief
T
Reply as a man
Bc im an unstable pisces lol, once I texted my ex something similar but it was way shorter. I didn't even tell him what he did but he went, "...
A moment ago
BaldheadedStepchild

It's not just "sex"
3) Nobody in their right mind and healed enjoy engaging in hoe activity. Some type of life disappointment, lack of self worth, chemical imbalance...
A moment ago
Star Jones
Top Bottom