So I’m on Instagram and I see this ad for a BLACK OWNED hair company...

Immediately I’m weary cuz Instagram has tons of scammer businesses, so I decide to check the comments and every thing seems normal. They’re openly professing to be Black owned and even taking up for Black women in the comments (and their grammar was good no shade) . . . 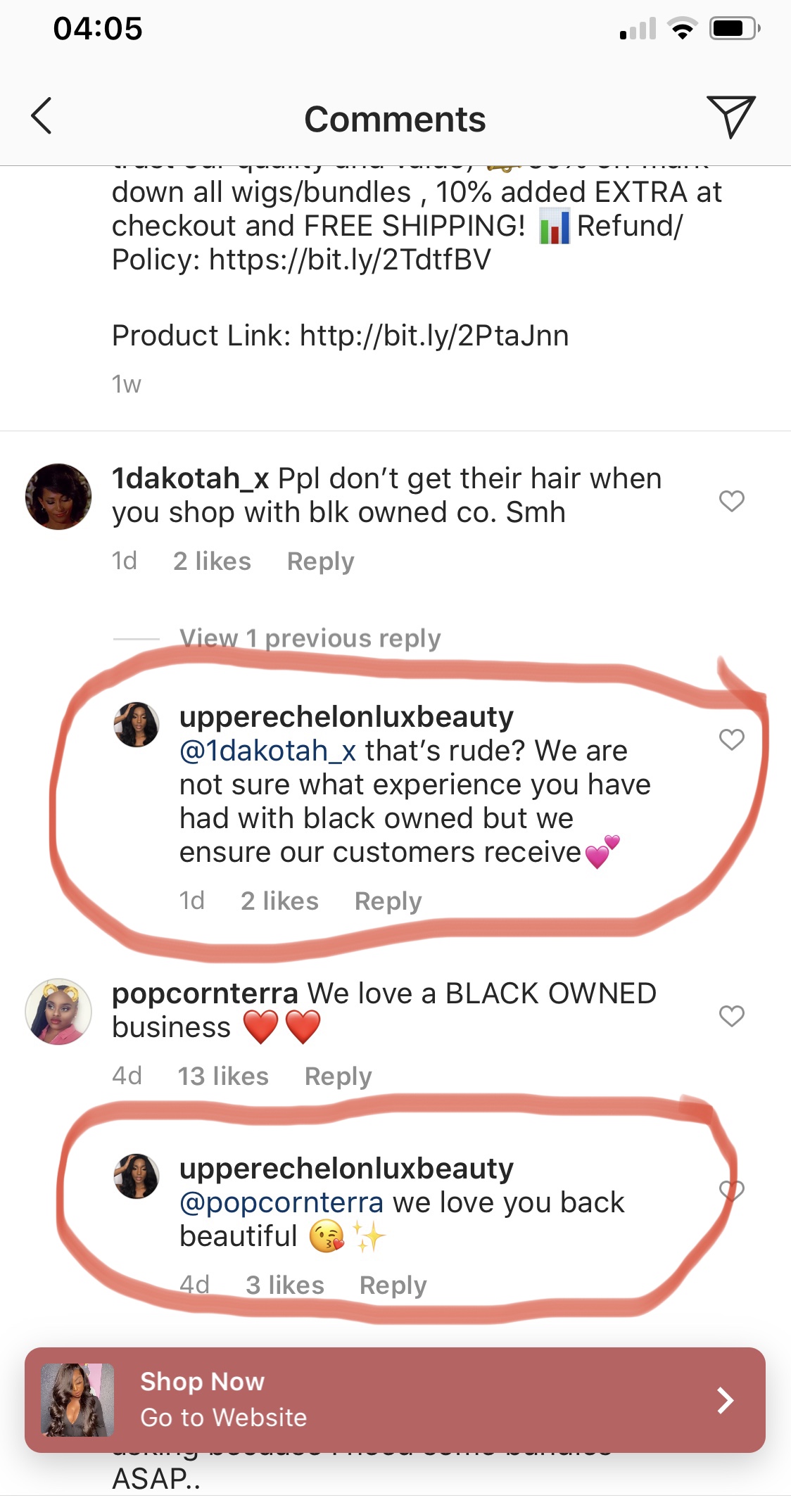 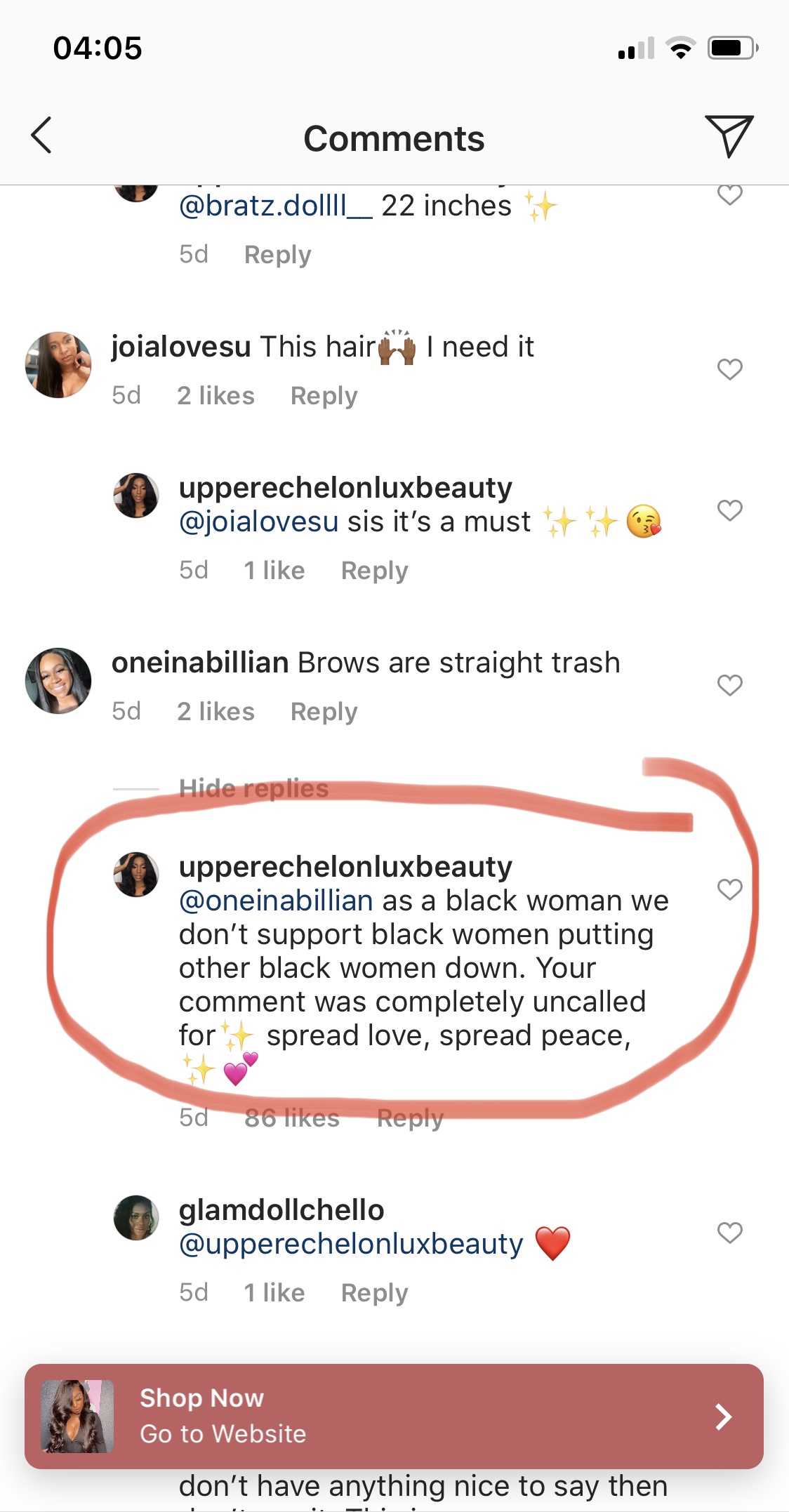 At this point I started to think they may be legit, but then I click on their profile and immediately the profile pic screams catfish (aka they got it off of Pinterest) so that was the first red flag. . .

Now if anybody watches the hair youtuber Slayed By Jordan, you would know this is his best friend and whenever he installs hair on anyone he tags the hair company in the title. So I run to YouTube and I find the video with the same girl (his best friend) rocking the same hair and the title says the hair is from Tinashe hair, not from this company Upperechelonluxbeauty


The 3rd red flag that completely confirmed it was a Chinese company was when I went to their website and it looked straight out the aliexpress “I sell hair but I also have an official website” handbook. They have over a 100 five stars reviews, but yet I can’t find one video on YouTube of someone reviewing the hair . . .

I can’t say I’m surprised, because in wake of the Black Lives Matter movement and Black folks deciding to support Black Owned businesses, these companies realized how strong the Black dollar is and without it their businesses will eventually fail. This has lead to some of these companies bamboozling and hoodwinking black folks into believing their Black Owned to make money. I advise anyone who has been or is now attempting to support more Black Owned businesses to do extensive research on some of these companies because I have a feeling we’re gonna be seeing more scams like this in the upcoming future.

Wow not surprised tho
O

Might not be the Chinese lol, but someone of any ethnicity can run these businesses and claim "black owned." Anyone can start up a shopify shop & run an instagram page, use suppliers from china (aliexpress & alibaba) for example anonymously. It's very unethical to claim "black owned" business, especially during these times.. but from a marketing perspective it's smart and i'm sure a lot of these small businesses are riding the black lives matter wave right now just to profit.. it's pretty sickening to think people would go to these lengths though.

Disgusting. Please y’all be wary of who you’re giving your money to. I don’t give a damn how good the hair looks.

Majority of those hair ig pages steal photos from silk press videos. Their can never be a true black owned brand when importing weave and wigs from Asia. The only exception maybe be black owned braiding hair manufacturers.
Last edited: Jun 18, 2020

Of course if you tell everyone and their mother that you buy from Black-owned only then non-Black scammers will pretend to be Black-owned.

When will we learn??

None of our conversations are private on the internet! You don't know who you're spilling your guts out to.
5

I've been making sure to verify that these businesses are actually black owned and it can be difficult. My mom was about to order some headwraps from an allegedly black owned website, but when we looked deeper, their mailing address was in Hong Kong. Maybe it's a black owned business operating out of Hong Kong or they just use a Hong Kong factory, but she didn't take the chance.

I really have to look up the "about us" section and browse their social media to make sure they truly are black owned.

Don't buy stuff off IG or pages. I buy from established businesses. If you starting out. I'll catch you in 3-5 years.

Let’s all stop buying asian people hair all together.

Okay so two things I don't agree with anyone claiming to be black owned if they're not and I feel the same way about those who are black owned, but are going to turn around and shun or shit on us like that swim company fuck them.

With that being said, companies especially these Chinese one's its common for them to steal photos that are popular around the web. Or the "New to this not true to this" youtubers with a certain hair texture getting into wigs and doing wig reviews because that's the new wave. They're taking any and every sponsorship that pays and in some of those the wig companies want permission to use your photos. People who actually care about business and being paid fair actually read the contract and they call out these types of companies all the time paying like trash, but they expect all from the reviewer.

SuccessfullyMe said:
Don't buy stuff off IG or pages. I buy from established businesses. If you starting out. I'll catch you in 3-5 years.
Click to expand...


That's the thing though ig is filled with scam sites that take people's money & NEVER deliver a single product. I started paying with my cc after being burned once. I tried to buy a beautiful 'black art' phone case for my phone & they NEVER got back to me a whole week after TAKING MY MONEY. Even some of the clothing boutiques are shady [on ig AND fb]. If you don't see interaction with the actual person then take it with a grain of salt.

I thought I told y'all that most of these companies if not all, are all asian; specifically Chinese and use black faces to sell. I work with Koreans and they've told me about how these Chinese run things and I've met representatives from these companies since my bosses love and trust me. They are allll Chinese/asian! I have yet to meet a black woman come in there trying to tell me anything.

This is not surprising at all. People pretend to be black online for likes & clout. I guess pretending to be a black owned business is just the next level of their blackfishing shenanigans smh

Cashier Arrested After Hitting Disruptive Customer With A Full Wine Bottle
It was unnecessary of the customer to punch that glass so the cashier unnecessarily popped a wine bottle on his head. They're equal lol.
A moment ago
ADRENALINE

After Ben Affleck getting clocked and outed on Raya, Matthew Perry Haggard Looking *** is next!!
“so.....what’s your favourite colour?” this picture is killing me “So.......what’s your sign?” (respectfully)
A moment ago
The Justicar
I
YouTube's Beef Sector: The Poor Reports
Brie has gotten even bigger. I’m really afraid for her. She looks really bad. They are going to have to crane her out of that apartment. Look the...
A moment ago
Palm Reader

Chef Resha and her new baby chronicles
Come on you guys, she’s big as a house. I don’t think she’s showing her face/neck area for a while. She may show those stubby fingers holding...
A moment ago
Shady Bella

The Henry Cavill Appreciation & (Former) Harem Meet-up Thread (Part 6)
Why are people here so pressed about this clickbait garbage. It’s not like they wrote these “articles” themselves. Because there’s nothing else...
A moment ago
DragonStar

Found you guys a new AMBW youtube family! (MAZELEE) - Thread II
That settles it. They're all dumbass frauds. The address Akeeba put down as the principal address on Bizapedia, belongs to several current and...
A moment ago
WorkingBeez

Plus Size Shay
Bye Shay. It’s nobody else’s responsibility to check Jay. She talking about Barbie should have checked Jay but instead wants to check me, the...
A moment ago
Sexta

NYT: Are Animated Dads Getting Hotter? An Investigation
Whoever wrote this needs to get laid
A moment ago
FaCough

Attorney for Capitol Rioter Says His Client Had "Foxitus" and "Foxmania"
This is the most ridiculous thing I have read today (foxitus and foxmania) but also propaganda has led to major world wars sooooo I guess. I hope...
A moment ago
ExquisiteMelanin

EVICTION Moratorium Is OVER on the Federal Level. Renters May Still Be Protected By State Laws.
I told you guys there was a bigger picture. War and chaos. Biden saw Israel and eviction war and got shook. Our ally is on the brink of war due to...
A moment ago
Cheerleader
Top Bottom