Dusty Springfield is considered by many to be one of the greatest blue-eyed soul artists in American history. During her commercial peak she experienced major transatlantic success that most british artists could only dream of. She also was a consistent hitmaker in the 1960s, second to Petula Clark as the most successful female artist of the British Invasion. From "I Only Wanna Be With You", to "You Don't Have to Say You Love Me", "What Have I Done to Deserve This", and of course "Son of a Preacher Man" she's left behind a musical legacy, few could attain. So LSA, what do you think of Dusty Springfield?

Yay, she had a beautiful voice and I love her jazz covers

I used to listen to her music a lot and I still think she was a great artist. Dusty’s voice could be considered more of an acquired taste to some, and I accept that people don’t take kindly to white people singing black music. Although, I’ve read that she played a part in getting Motown acts over to the UK to perform in the sixties. I like that she insisted on going to Memphis to record with their session musicians when she could’ve made that album in London or L.A. or wherever else. That move had integrity behind it. Unfortunately, her legacy could do with some help, since I have not heard her mentioned as an influence on any current artists since that girl Duffy.

Also, according to this 1964 interview she hated (masculine) men (it makes sense given that she came out later in life). Iconic. 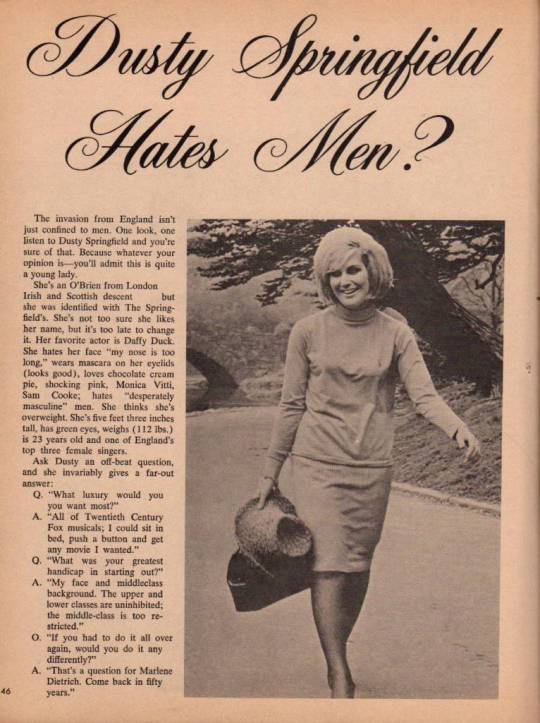 Juicy, piping, Tea (with health benefits).
I have been in wealthy, powerful circles for over 3 years now( i started when I was 19). Some of these #securethefonts don't know the reality...
A moment ago
Loqal

PLEASE help: How can I support my self-hating lesbian friend? (TW for suicide/self-harm)
She's always been celibate until now. I think that's what has triggered all of this - loving a woman and being in a relationship with her. The sky...
A moment ago
SendAnOracle

What is Rustic Wedding Attire?
Thanks so much for your help. This gives me a lot of options. I'll probably wear a boho/maxi dress with a floppy hat. I hat might be a little...
A moment ago
ohhappyday

Games that scare the **** out of you?
Ouija board
A moment ago
Marlleny

Asian Celebs LXXVI
Random? But how come BTS doesn't have a dedicated appreciation thread? Wouldn't y'all enjoy a thread where you can obsess of over chart positions...
A moment ago
TWEET HUMMELS
N
Preacher Heather Love
y’all.. i can’t even laugh anymore This is so cringy to me... PEW
A moment ago
LoveHard87

New Youtuber Kirah Ominique- Any tea?
It’s really as simple as if y’all don’t like then dont engage or start convo about what you wanna speak about. It’s being brought up because she...
A moment ago
mscsideeyein

Is stalking normal if he is in love with me?
Oh, please. Are you jealous? That’s the only reason why you’re acting like men can’t want to be with one woman forever. Yes they’re invested and...
A moment ago
heartmindandsoul

GPK
You know she’s going to make a post and her followers are going to tell her she’s a good mom :cautious: You know it’s coming. Has she taken the...
A moment ago
dst10spr97

WAGS THREAD PART XV (CLEAN VERSION)
You're probably right. I have no idea. But he's so sneaky about her, you never know. See... She is just too much, the thirst is real...
A moment ago
PrettyFaceK1lla
Top Bottom