MelancholyMami said:
these new age boys always trying it and failing. crappy, one off photoshoots instead of really living the aesthetic. androgyny isn’t about simply throwing on a dress and makeup, but blurring the lines and perception of the masculine and femme. Atsushi Sakurai from the rockband Buck-Tick is one of the TRUE kings of this shit.

your mediocre white faves could never!
Click to expand...


Wow, he looks really good! Never seen / heard of him before.

This doesn't seem "genuine". I don't know why he continues to do this shit. Also, I didn't notice his hairline until now LMAO.

Male musicians in the past have this before so... Unless he's trying to tell us something

It's an interesting dress. It kind of looks like a bunch of the fringe from a nightgown I had in the late 70s/early 80s, but I'm intrigued.

Reevertigo said:
This is exactly who I thought when I saw these photos

Harry's clearly trying to model himself after Bowie. Bowie however was actually somewhat compelling to see, Harry just isn't giving me that. Screams really try hard, like he forethought about the poses several times in order to come off 'edgiest'.

I'm tired of these present day artists who stay copying ppl before them smh just be your own person
Click to expand...

he is. almost every single one of his stage outfits is a "Tribute" to some artist before him but it just reeks of unoriginality whenever he does it. 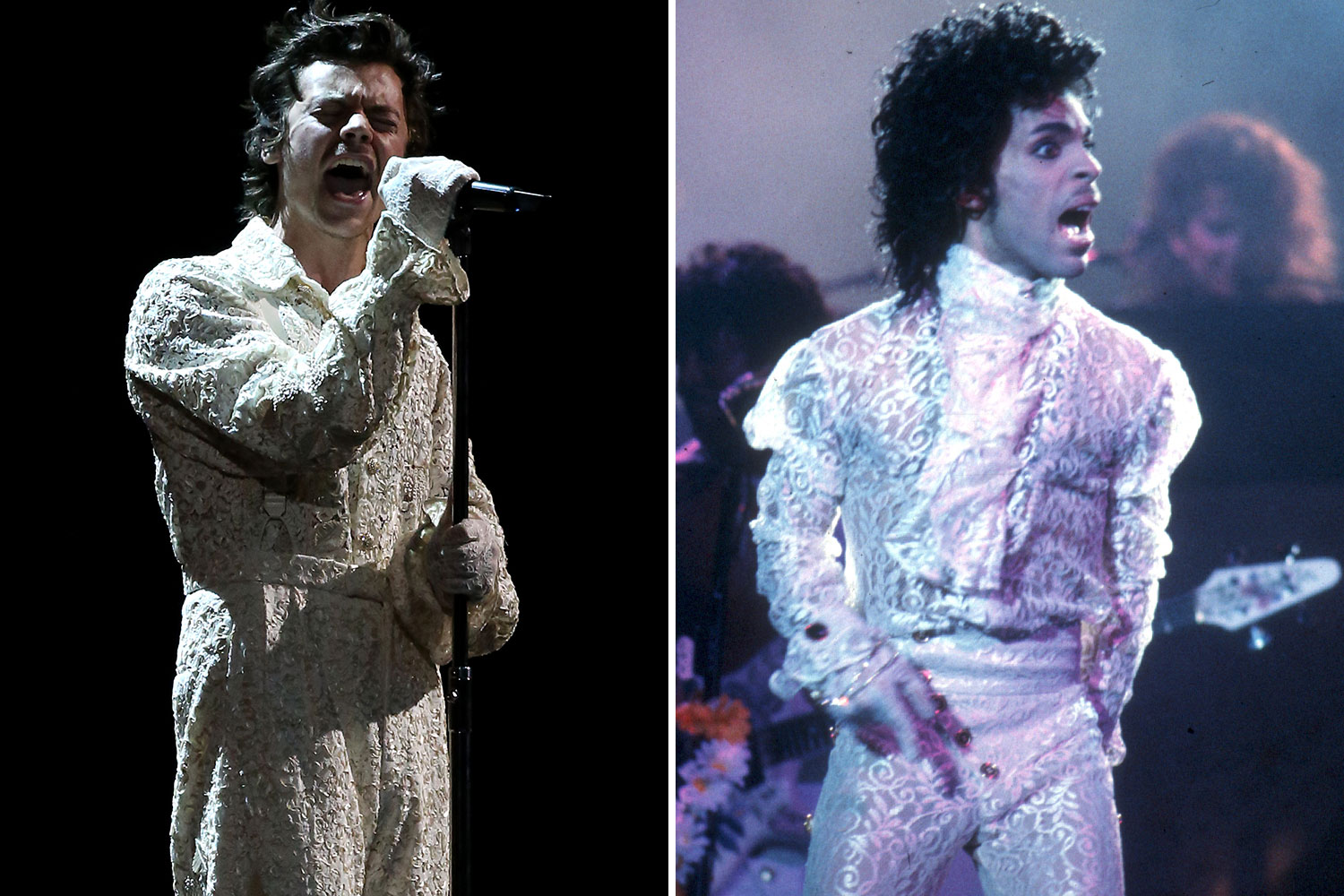 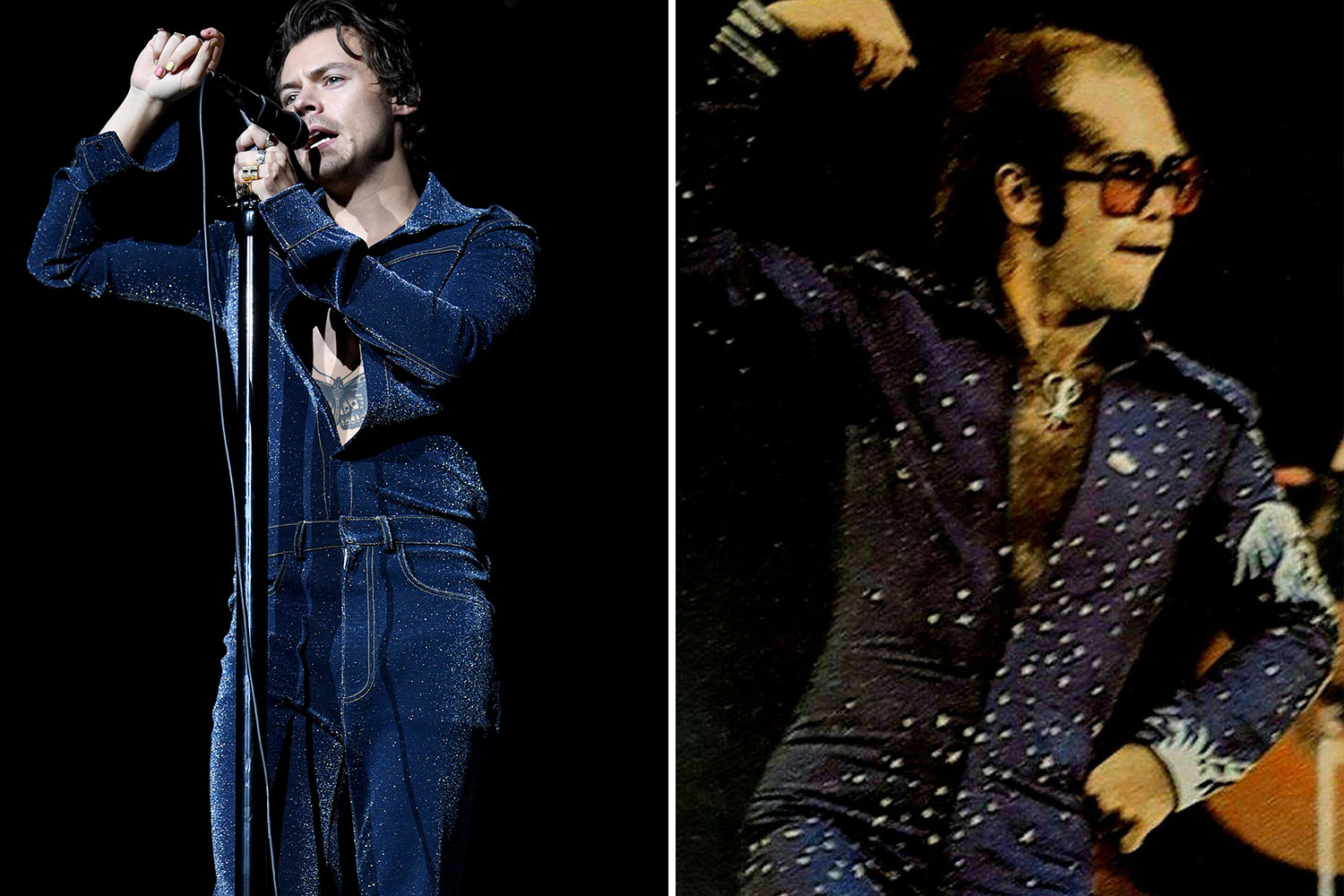 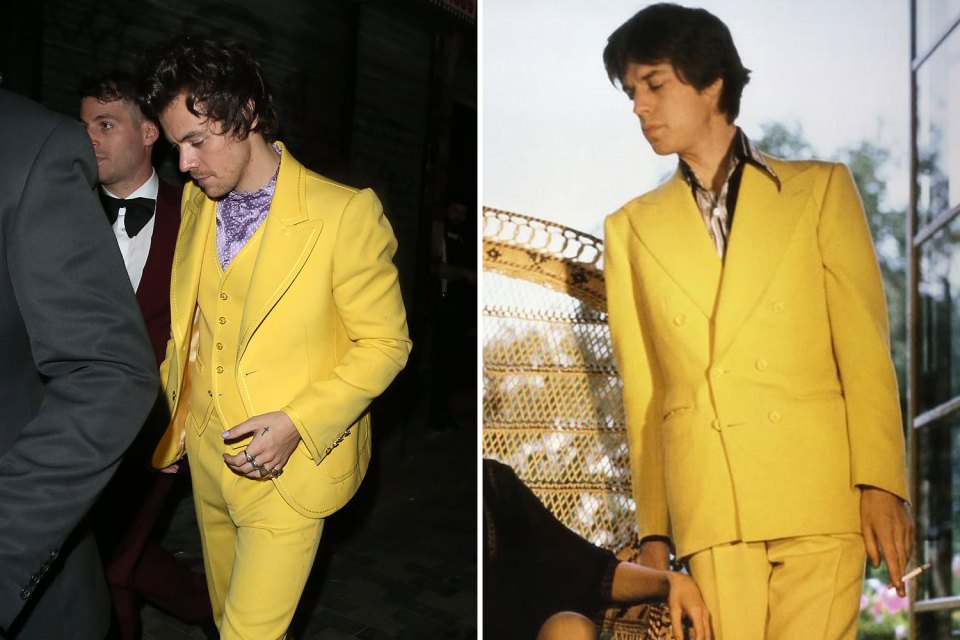 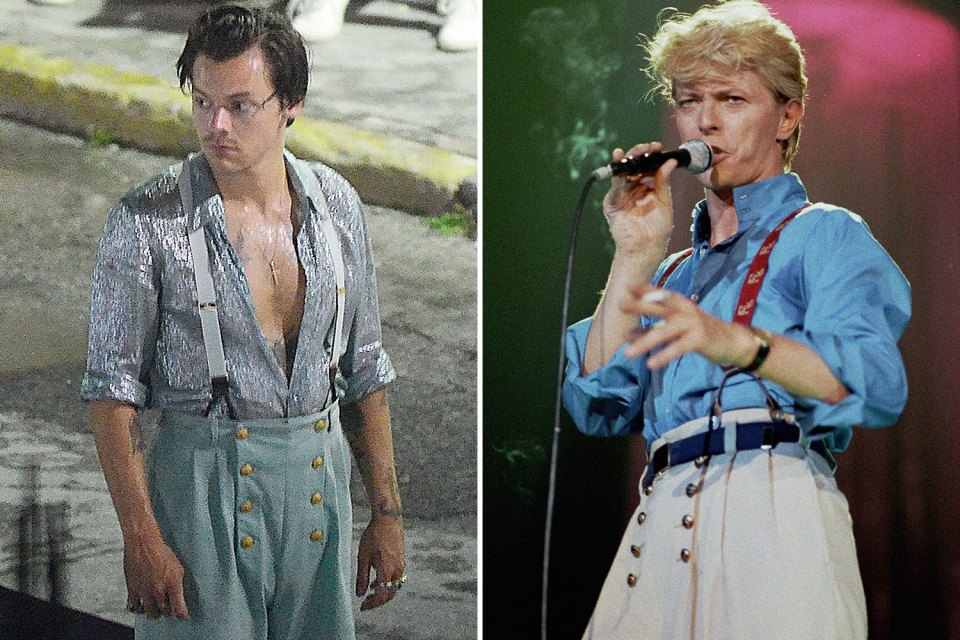 and they all look absolutely tragic on him lmao

He wants so desperately to be like a modern day Bowie or Prince but it's so disingenous. We all remember you weren't dressing nothing like this back in One Direction

MelancholyMami said:
these new age boys always trying it and failing. crappy, one off photoshoots instead of really living the aesthetic. androgyny isn’t about simply throwing on a dress and makeup, but blurring the lines and perception of the masculine and femme. Atsushi Sakurai from the rockband Buck-Tick is one of the TRUE kings of this shit.

your mediocre white faves could never!
Click to expand...


Yasss! Astushi is bae. These white men are boring and don't commit fully like the alternative men in Japan do. They just look dusty and ugly.

Then it was all down hill from there. This potoshoot was such a snooze-fest. He looks short, old, borig and has the same bland facial expression in all pics. "Go girl give us nothing" LOL. The dress is the least of the problems.
F

My reaction BEFORE clicking on the thread...

Scrolling through the pics...

2020username said:
Wow, he looks really good! Never seen / heard of him before.
Click to expand...

I LOVE the song ‘dress’ from trinity blood. Good anime. That was my first time hearing buck ticks music. Atsushi’s aura is amazing and chill.
G

Quirky clothes with old-looking backgrounds is the thing for this generation. I don't even know this man, but its a no to him...sorry

Because he's probably getting pounded out and yall calling him fake gay and clout chasing.

I thought he looked cute sometimes, but he's been looking so rough lately...

2020username said:
Looking at the difference in his eyes between these two pics it looks like something has happened to him in the past two years. I don't know if that involves some creepy older man or not. These pictures do make me feel bad for him as I see suppressed pain in his eyes... nobody criticise me for being an armchair psychologist pls!!
Click to expand...

i agree. Something deffo happened, ever since leaving 1d, he just comes across as tortured. Even when he was in it, it was like slowly but surely... i think Hollywood is doing something to him

KrazyAngel said:
he is. almost every single one of his stage outfits is a "Tribute" to some artist before him but it just reeks of unoriginality whenever he does it.

and they all look absolutely tragic on him lmao
Click to expand...

Zayn is the only FINE ASS mfker from one direction

The kilt is cute but the rest... do the people behind these editorials think they are being revolutionary by allowing a man wear female clothing?

TikTok is also on this "men in dresses/skirts" bs. Bowie didn't do this, he was way more creative and tried to pull off the androgyny look which he did well.

Dresses and skirts are constructed for the female body and it's contours. Shit looks ridiculous on a male body. 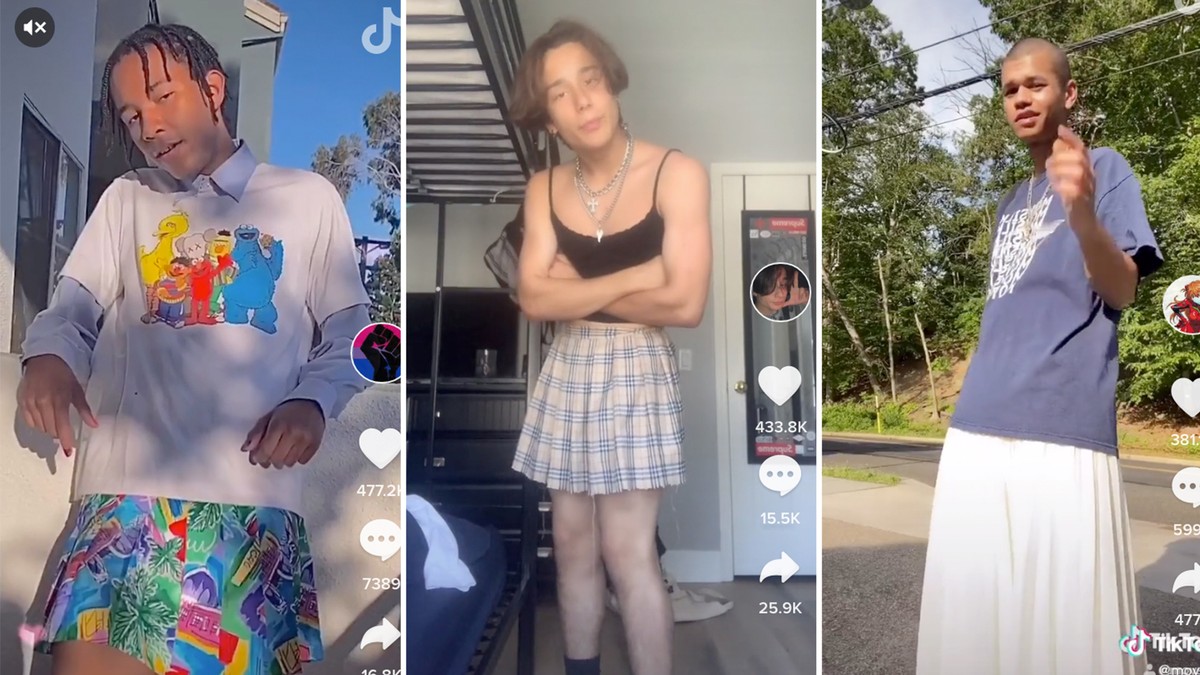 The skirt is constructed to highlight the female waist. WTF is this?

sankofaa__ said:
He was a cutie pie like 10 years ago, idk what happened.

I blame the 1D fangirls for boosting him up as some genderfluid fashion queen in their little fanfics. Now he's trying to live that in real life and it's just not up to snuff. I don't think he's straight but it'll be some years before he ever comes out with it.
Click to expand...


Ain't that the truth. I blame the Larry Stylinson Fandom which I don't think Harry really was bothered by. He seems to be catering to them in a subtle way. But like I said before it doesn't fit him and is try hard.

If your gonna haunt me, be helpful.

He looks a mess. I don’t see how he can look at those pictures and think that he looks good.
B

Harry styles just isn't interesting to me. I'm almost confident this boy is 100% straight but he's a david bowie wannabe who plays up his "ambiguous sexuality" to appear more interesting. Like how is it progressive to have a straight white man on the cover of a women's magazine?

Add mask in there too cause soon as he took it off in that 2nd pic all hell ugly came loose.

So Kamala Harris is our first Black female vice president but Anna would prefer to put a white man in a dress on the cover?

2020username said:
Wow, he looks really good! Never seen / heard of him before.
Click to expand...

yeah his band is iconic in Japan! he's a fantastic vocalist/multi-instrumentalist. this my fave song from them called Dress.

Young thug did it better.

I wish he would stop. He doesn't pull it off.

Seeing these pics ruined my day. He looks so... musty. I regularly see people on my timeline hype his looks up up and I can't help but think 'wtf is wrong with these people'.

I used to be such a big 1D fan in my teens, it's crazy how the majority of them peaked in their late teens/early 20s and are flopping both musically and appearance-wise. Zayn is one of those people who I feel like will look gorgeous no matter what their age is or what their lifestyle is like. Niall has aged pretty well though and pretty much looks the same, but I guess that's because he minds his own business and isn't being annoying lol.
You must log in or register to reply here.
Share:
Facebook Twitter Reddit Pinterest Tumblr WhatsApp Email Share Link

He proposed to me! I hate my ring!
Congrats! Tell him how you feel.
A moment ago
kamilamb

Why can't Lindsay Lohan make a come back?
Lindsey Lohan killed dead her own career. Nobody's fault but her own. The limit does exist and she's past it. She is clearly easily...
A moment ago
BestFwends

Lori Harvey finally doing make up Routine on Vogue y'all
who washes their face with lashes on and brows filled in? She's pretty...:good Someone who LSA thinks is "confident" Lol
A moment ago
EmanuelaC

Makeup Products you regret buying
I bought the beauty bakery mini lip whips from Target. I’m hoping to return them because they look nothing like the swatches on their ig.
A moment ago
Head Pirate

The Circle US Season 2 on Netflix April 14
Who is the fan favorite?
A moment ago
sweetfusion™

Wearing this dress will . . .
Who would ever walk out wearing that??!! lol.
A moment ago
NicholeRose

As I black woman it makes no sense to have solidarity with black men
You better tell them ! lol
A moment ago
avocadofresh

Why do Democrats think playing fair is good when it causes them to lose?
Most Dems are weak-sauce. That's just the way most are.
A moment ago
Kenyata_1961

The Handmaid's Tale | Season 4 Discussion Thread
I'm still annoyed they obliterated Alma and the other girl like that. Also the girls who got pushed off the building for June to cave in the end...
A moment ago
saadiyah

The Cambridge’s are starting a YouTube channel
Are you sure? Because as a regular in the Buck Swirl thread, you lot spend more time going on about Kate than anything. In fact, take away the...
A moment ago
Sdizzle4shiz
Top Bottom