Annalise learns unexpected and shocking details about Sam’s past. Meanwhile, Connor and Michaela feel the pressure when the FBI learns there is new evidence in the case; and Frank and Bonnie’s history is explored, revealing what originally fractured their relationship
Click to expand... 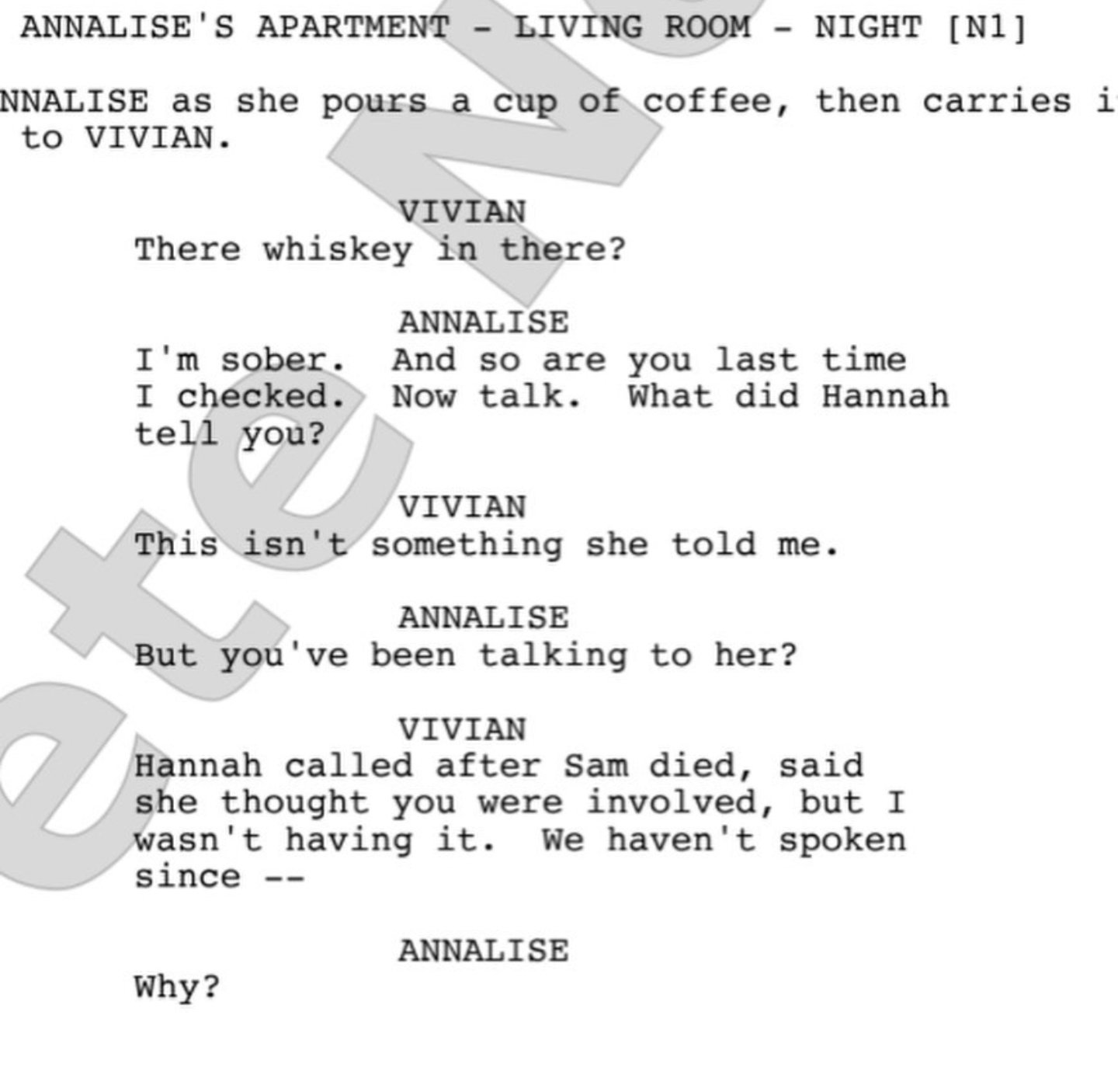 I’ve been keeping up although the show has been a snooze fest. I told myself I’d just wait until the series was over then watch all anti-climatic episodes back-to-back....yet here I am

You’re the facsimile, I’m the original.

The twist? God only knows what kind of fuckery will occur. Remember Pete is at the helm of this show. I’ve learned to have absolutely no expectations with this anymore.
All I know is that I need a Wes explanation sooner than later.
X

DC123 said:
Michaela and her sperm donor bond of her her being conceived because Solomon was trying to get over AK..
Click to expand...

Its lightweight been a chore to watch these last few episodes.

They better make tonight worth my while. Today's my birthday.​

Damnit I applaud you guys for sticking and staying. For two weeks I didn't know it was back and I caught up and somehow missed how it went from Who killed Analise to who killed Asher, because I could have sworn this shit ended last season saying Who killed Analise. Sad shit is I don't even care. Got enough flashbacks to see Asher get killed and realized I dislike Ollie more and wished it was him. All these backwoods twists and turns and I'm still not on the edge of my seat. Series almost over and we still haven't seen Schmurda's facial expressions change. It's a damn convoluted mess.

Look, I have been tapping out of unwatchable tv since the covid hit. I never caught the final season of OITNB, that damn Sistas shitshow was my bad tv guilty pleasure just to hate watch and drag on LSA, and HTGAWM was my time to watch Analise kick ass and get those pesky kids in line. This is not my Analise, Michaela did not turn out to evolve into the character I hoped she would, and all of them stay doing stupid shit and blaming Analise for it...even old ass Nate. I'm tired damnit.

Touch a button if yuh brave

Thanks for the tag, Babe. I missed last week's episode because well, like someone above said, it's a chore to watch this show and I just couldn't be bothered. I'll be here tonight.

@peppercorn For it to be the final the season I expected more, even from Pete's ass. He should have been bringing it from episode 1 with closing up plots and having AK on her A-game not creating more nonsensical shit.

@BonnieSchmurda I think it's better to watch them as they ago so you can get the disappointment over with.
Last edited: Apr 30, 2020

Good morning , watch us be disappointed

Idk why but I was shocked when I saw this thread on the sidebar because I thought the season was done already.

Hey y’all! Thanks for the tag. I’ll be here

Hey gang, thanks for the tag. I am finally all caught up and I’ll be watching live tonight. Can’t wait !

Thanks for the tag...I'll be watching.

I'm not getting my hopes up about the twist...watch it be something silly.

Oh and love the recap. I’m so confused on Robert’s end game. His character doesn’t seem necessary, just thirsty. Hopefully there is a twist with his character that we don’t see coming. I don’t like how this Tegan being in love with Ana Mae. Their characters are better as being good friends. Nate has become so freaking annoying, and I hate how Gabrielle is being treated so badly.

You’re the facsimile, I’m the original.

LVNA said:
Its lightweight been a chore to watch these last few episodes.

They better make tonight worth my while. Today's my birthday.​
Click to expand...

Supreme Reign said:
Thanks for the tag, Babe. I missed last week's episode because well, like someone above said, it's a chore to watch this show and I just couldn't be bothered. I'll be here tonight.
Click to expand...


It didn’t come on last week because of the draft, so you’re good!

Touch a button if yuh brave

lowkeyqueen88 said:
It didn’t come on last week because of the draft, so you’re good!
Click to expand...

Oh, thank you lol guess I made a good call staying in my bed then.

Sam has been dead for a minute and honestly I’m tired of these lil twists. These twists should’ve popped up the first time we met Gabriel and Viv. How is all of this gonna be tied up in the next few episodes? It’s gonna be rushed. I hope Pete never gets another show to run again b/c he is horrible lol

I'm curious to see how stupid this twist is lol, see y'all tonight!

I’m just gonna way, if the season don’t end with Michaela and Asher in jail, I don’t want it.

Don't fuck with me fellas!

I feel like it isn't really gonna matter what the twist really is. My theory that the way Hannah fits in in all this is that she's feeding information to the FBI - which is kinda dumb because they don't really need her - she knows nothing they can't find out on their own but they will make a thing of it like she's some star witness or something. Annalise will then use whatever the hell the twist is to pressure her to back off which the synopsis for 614 hints at anyway.
I can't think of anything really clever - i was thinking Frank's real mother is the aunt Bev she knew in highschool and Sam is the father, Hannah pressured them to give Frank away. It's such a cheap daytime soap opera twist but it's not as if Hannah with Sam and Frank can fit into anything more relevant.
Hannah did something shady at some point which will be used against her which in all honesty is kinda lame for the final big twist of the show.

Don't fuck with me fellas!

Minnie Mouse said:
I’m just gonna way, if the season don’t end with Michaela and Asher in jail, I don’t want it.
Click to expand...

I need them to wrap up this case against Annalise tonight since there are only 3 episodes left. Everything from here on out needs to be tying up loose ends so we can get to the funeral and WesBae by next week. In the end I'm hoping Anna set all them kids up, faked her death and is living on an island sippin umbrella dranks while having the pool boy come "check her water levels" every now and again.

It's been confirmed last episode was his last appearance . I need it to be a lie from the actor and showrunner because otherwise, that does not bode well for the finale. Not that the writing up to this point has anyway.

Thank you for the tag OP. I need to know if Wes is really behind all this mess.
Be back later!

GrahamCracker said:
Well it's too late for Asher....
Click to expand...

The Henry Cavill Appreciation & (Former) Harem Meet-up Thread (Part 6)
We know she loves her filters, so that may account for any loss of crinkly eyes, whatever, He's been smoothed out. Damn, if that's the case, that...
A moment ago
mochibean

IG influencer: Jalisa E. Vaughn
Everything about this girl seems phony as hell, including her marriage. She had a timeline and when people try to give advice she says she knows...
A moment ago
Iloveteatea

Urban Decay X Prince is coming...
According to a thread from earlier today, yes his estate is backing this: Urban Decay makeup has partnered with the Prince Estate If there had to...
A moment ago
Justa

***The Masked Singer Season 5***
Yeti will make it to top 3 for sure. He may even take it home!
A moment ago
ILove2SipTea

Les Twins Tea anyone???
Lying bout what?? I don't have to lie to strangers ma'am. Thats my pic. Folk on here KNOW I'm Sunshine. Try again Sam You keep replying to me...
A moment ago
Dondoneitall

EVICTION Moratorium Is OVER on the Federal Level. Renters May Still Be Protected By State Laws.
IMO that should only be for certain people and people whom kept they rent paid should get a reward for doing so and somebody who ain't paid a damn...
A moment ago
Marie Boston

Neffi Walker
She posted that she sent Nile off to school regardless of being told she couldn’t but then she had Nile in her story helping out in the store lol...
A moment ago
trixydixy

Guy from tinder refuses to share social media information
I don't share my personal accounts (just LinkedIn and IG at this point) with guys I just meet. There's so much personal information on there that...
A moment ago
chelley
Top Bottom