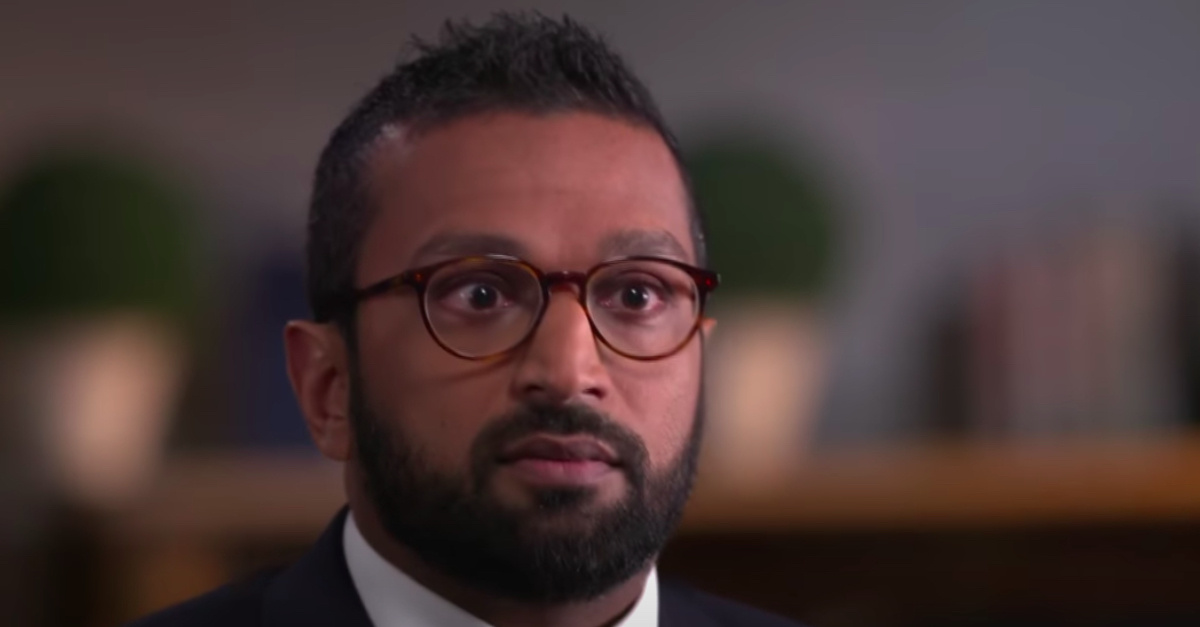 The DOJ is reportedly investigating whether Kash Patel improperly disclosed classified information in attempt to prove that Donald Trump was being targeted by the alleged “deep state.”

Patel, a former counterterrorism prosecutor in the Justice Department’s National Security Division and senior aide to Nunes, had joined the the National Security Council staff in February with no apparent experience in Ukraine or Ukrainian politics.

However, “at the last second,” Vindman’s debriefing of Trump was cancelled, he reportedly told lawmakers Tuesday. According to accounts of the testimony, Vindman was told by NSC senior director for European and Russian affairs Dr. Fiona Hill that his positive outlook on U.S.-Ukraine relations might confuse the president because it would contradict what he had been told by Kashyap “Kash” Patel. Hill previously testified that Trump had been led to believe that Patel, not Vindman, was actually the NSC’s top Ukraine expert.

The DOJ is reportedly investigating whether Kash Patel improperly disclosed classified information in attempt to prove that Donald Trump was being targeted by the alleged “deep state.”

In the Trump administration’s four-year battle with the intelligence community, a recurring character was a brash lawyer named Kashyap P. “Kash” Patel. He appeared so frequently, in so many incarnations, that he was almost a “Zelig” figure in President Donald Trump’s confrontation against what he imagined as the “deep state.”

Patel repeatedly pressed intelligence agencies to release secrets that, in his view, showed that the president was being persecuted unfairly by critics.

Ironically, he is now facing Justice Department investigation for possible improper disclosure of classified information, according to two knowledgeable sources who requested anonymity because of the sensitivity of the probe.

In the closing months of the administration, Patel became the chief of staff to acting Secretary of Defense Christopher C. Miller. Soon thereafter, then-CIA Director Gina Haspel reportedly threatened to resign after Trump attempted to install Patel as her deputy in an effort to oust her from her role leading the agency.

In one of his final acts as a government official, Patel reportedly blocked the Biden transition team from having access to career officials and experts within the Department of Defense and changed policy descriptions “to include content that reflects favorably on Trump’s policies before the information [wa]s shared with the Biden transition team,” NBC News reported in December.

I bet everyone in the Trump administration is selling to the highest bidder. It's a frightening time.

Who exactly is surprised???? This is why people said Trump shouldn’t get those briefings presidents can get once they’re out of office, all of these people are corrupt!! Every person associated with him is corrupt yet they kept chanting for Hillary Clinton, the Biden’s, Obama’s etc to be locked up... haven’t they all been investigated by Republicans? Tuh!

I read this as Nunes being under investigation. I was thinking "Finally!!" because he did a lot of shady shit trying to protect Trump during the Mueller investigation and first impeachment. He needs to go to jail.

But I guess not.

Lillian Vernon said:
I read this as Nunes being under investigation. I was thinking "Finally!!" because he did a lot of shady shit trying to protect Trump during the Mueller investigation and first impeachment. He needs to go to jail.

these people did the most disgusting things all in the name of Trump, they acted like he was King President and would reign forever. Welp the show is over and they’ll all be held accountable and it’s what they deserve. Watch the video of how they treated Michael Cohen during his last testimony before he went to prison.
You must log in or register to reply here.
Share:
Facebook Twitter Reddit Pinterest Tumblr WhatsApp Email Share Link

Bill Gates reportedly transferred $1.8b in stocks to Melinda on day of divorce news.
They already worked everything out to the number. Fo them the last step was letting the world know. They already spent months with lawyers.
A moment ago
Tammyblue

Do you think its true that Black men are more attracted to women that resemble their mothers...
I'm attracted to all Black women, like Dr. Umar said --vanilla, butter pecan, caramel, dark fudge......I like and have dated all shades and tones...
A moment ago
ToryHart202
T
Are Stock REITs undervalued in this market . Time to check the charts
I read about REITs last year and definitely want to get into it but I'm still so new with investing that even navigating my account is a learning...
A moment ago
LazyDaisy

Do you think states like Mississippi can ever be a place of black progression?
Maryland isn’t the south, it’s the Mid-Atlantic. I know y’all would wanna claim MD to make the South look a little better, but you can’t. Only...
A moment ago
MGTiger

The Pedro Pascal Appreciation, Tea and Thirst Thread
Lmaooo is that what she said? Please plenty of bi women are biphobic themselves. The stories that I’ve heard from bi pan make friends and...
A moment ago
CalypsoFire

Chris Brown VS His Stans Over His Baby Mama Ammikaa
I’m not a Chris fan in the slightest but these fan pages are literal stalkers and weirdos. What makes people l think they’re allowed to harass...
A moment ago
jazrynee

Miami Tea Ch 4 2021
Victoriamatgarita looks tf good:heart_eyes: do yo big one
A moment ago
munajanae

Post and Delete: City Girl JT Admits She Missed Meetings She Was Supposed To Take For Yung Miami
i used to support her after seeing people hating on her for being "the darkskin one" but she's SO unlikeable i'm done with her ass So it was pity...
A moment ago
WestonRdFlow

Lori Harvey & Michael B Jordan kinda look alike.
Publicity stunt or not, these two are gorgeous together Not sure if I see it lasting a long time tho
A moment ago
GitchiYaYa

My mother called my father a gorilla then got upset when I told her it was anti black
No disrespect but your mom didn’t/doesn’t mind jumping up and down on top of that “big-nosed gorilla’s dyck when the feeling hits her...smh! Some...
A moment ago
Currv
Top Bottom